Do Rx Drugs Work or Do They Just Make it Worse? 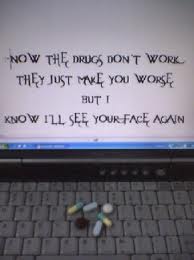 Prescription drug use is on the rise in America.  It not only amazes me how many people take prescriptions but how many prescription drugs individuals take at one time.  I was headed down the same road, so I not only have been there but also get the fear that is instilled by the medical model, the fear that you will NOT be better without the drugs and will not heal without the drugs.  When in fact the opposite is true, our human body is designed to heal itself it, needing no help, just no interference.

At the age of eleven, I started my journey with acid reflux.  Upon recommendation of my medical doctor I began taking chewable antacids.  When those stopped working I was recommended over the counter antacids and when the severity of my reflux peaked I was placed on prescription drugs.  Before I switched form the medical paradigm to the chiropractic paradigm, I was taking a concoction of two prescriptions, 3 over the counter, and carried a pack of chewable antacids with me at all times. I was a prisoner to the concoction that allowed me to enjoy my meals with minimal pain, burping, burning, and bloating.

For me my pivotal moment was my boyfriend at the time, Ryan. Very few people will say that their ex-boyfriend was an angel in their life but for me that is an understatement, Ryan was a lifesaver. Ryan explained to me that sick and dying was an option and that we were deigned to have optimal health.  He explained to me what chiropractic could do to change my life.  He explained to me that the Rx drugs I was taking were simply masking my symptoms and that I was actually getting worse.  He then explained that we as humans were meant to produce acid to aid in digestion and that my spine was subluxated so it was over producing acid.  He went on to say that the reason I went from chewable antacid to over the counter to prescription was because my body was doing what it was supposed to do and that the use of prescription drugs gave my body the perception it was being punished.  He informed me that the subluxation was the problem and the overproduction of acid was the symptom.  The oxymoron about the antacids was clear, my body is supposed to produce acid and the antacids were telling it to stop and because our innate will always balance us, in response to the antacids my body was in fact producing more acid.  Therefore I was actually increasing my overall acid production and making the reflux and bleeding ulcers worse, I was actually making myself sicker, the drugs just gave the illusion that I was feeling better as opposed to functioning better.

Drugs really are an oxymoron; while we feel better we are in fact functioning worse.  After becoming educated, I knew that it was time to switch my paradigm from medical to chiropractic. Within weeks, my life was completely different, not only was I antacid free but I was symptom free.  I was amazed at how great I felt and enjoyed not “having” to take a pill to enjoy my life.  I finally felt “normal” in terms of health.  This was my pivotal “Ah Ha” moment.  This was when I realized that the world needed the same paradigm shift that I had just had, switching from the medical paradigm to the chiropractic paradigm.

The medical paradigm supports the philosophy that we get sicker and sicker until we die, and follow the premise that through prescription drug use the sickness can be subdued.  Many people are under the misconception that drugs “heal” their problem, when in fact they simply mask their symptoms. The interesting thing about symptoms is that they are our body’s way of communicating with us similar to how your oil light lets you know that it is time for an oil change, therefore preventing breakdown by throwing a rod in your engine.  Without an oil light you would not know that you need to change your oil, the same is true of any symptom in the human body: high blood pressure, headaches, leg pain, incontinence, and a laundry list of other symptoms which are trying to alert you that your body needs attention.  Most people perceive symptoms as “negative” when in fact they should be seen as a “positive” as they are keeping the body in homeostasis to maintain proper function and sustain life.

Prescription drugs do a great job of giving the allusion that an individual’s pesky symptoms are gone when in fact they are just being suppressed.  Not only are the symptom not really gone, but the Rx drug often causes more symptoms and actually enhances overall body dysfunction.  Just as the Verve said, “The Drugs Don’t Work They Just Make it Worse” and just like in the song, street drugs mask the pain of a break up; in life Rx drugs mask the problem not make it go away.  Don’t get me wrong Rx drugs do alleviate the symptoms that an individual is experiencing but the underlying problem is still present just not noticeable via external perception. It is also important to make note of the vast array of side effects that are caused by Rx drugs. It is safe to ask,  “Do Rx drugs really make it better or long term are they making it worse?” Rx drugs are not the only option, in fact, most people would are baffled that there is an option besides more prescriptions. I know I was in utter disbelief that I could live my life without Rx drugs. Rx Drugs are part of the medical paradigm not part of the chiropractic paradigm.

The chiropractic paradigm is unique because it respects the human body and it’s ability to functional optimally.  While the medical paradigm says the body “can’t” the chiropractic paradigm says that the human body “can”.  The nervous system, which is composed of the brain, brain stem, spinal cord, and nerves controls every single function of the human body. When the nervous system is functioning optimally, the human body functions at 100%, free of symptoms.  The human body is under constant stressors: chemical, physical, and emotional that occur in our every day life and cause subluxations in the spinal column, which protects the spinal cord, these subluxations cause interference in normal body function.  Chiropractors detect subluxations, which impair nervous system function, therefore removing the problem and not just the symptom.  The chiropractic paradigm’s focus is optimizing overall wellness, where the medical paradigm is geared toward optimizing sickness.

I have never looked back on my decision to switch paradigms, not once in eleven years.  I live a life where I fully express life because my innate is fully expressed.  I am not sick and have no symptoms.  I have not taken pills, whether prescription or over the counter.  I get adjusted regularly and enjoy my life full out.  We all have the opportunity to live a life free of sickness, symptoms, dis-ease, and disease; it is our God born right.

If you need a chiropractor near you, feel free to email me at drm@drmarthanessler.com! I will find you someone to help guide you as you shift your paradigm!