“Caught the Wave and Got My Spizz On”

This weekend as a team, my staff and I,  attended The Wave at Life West College.  It was a fantastic weekend of spizz, being dipped in chiropractic philosophy and love.  At The Wave we had the pleasure of attending the inauguration of Dr. Brian Kelly.  Chiropractic is truly blessed to have such a true visionary at the helm.  When I heard that Dr. Gerry Clum was stepping down as president of Life West College, sadness fell on my heart.  Since the first time I heard Gerry speak I was a huge fan and supporter of his.  His love for chiropractors and the profession was refreshing and combining that with his desire to raise up principled chiropractors made me know that because of him the future of chiropractic would be strong.  Hearing Brian’s heart this weekend put to rest any worries that Gerry’s vision would die as he passed the presidential torch.  After this weekend there is no doubt in my mind that Life West will be producing principled chiropractors, chiropractors that will guard our sacred trust. 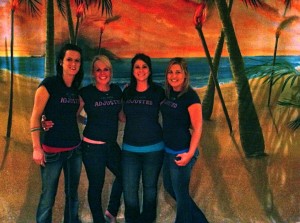 “The Wave” is a must attend for next year! Personally, my staff and I had an amazing well-rounded weekend! Dr. Kelley, the talented Tina Carter, and the rest of the amazing staff at Life West Chiropractic College put on a wonderful chiropracTIC seminar! There was the perfect balance between education and fun and even included the historical moment of Dr. Kelly’s inauguration and ended with a luau! The entire weekend was abundant in chiropractic spizzerinctum! All-in-all the first Wave was a huge success and created quite the wave in chiropractic!

“The Wave” is one of many great seminars where you can get spizzzed! Another favorite of mine is “The California Jam” aka CalJam put on by Dr. Billy DeMoss and the Dead Chiropractic Society!  I have also heard wonderful things about New Beginnings and am hoping to attend my first New Beginnings this year in October! EPOCs, COREs, DCS, Band of Brothers, 33 DCs, and other philosophy groups are also great venues to get dipped in TIC and to be immersed in spizzerinctum! Wherever you decide to go, GO! Just get re-fueled, get “spizzed”!